Microsoft first experimented with this feature during development of Internet Explorer 4 in 1996 and 1997. It can be observed in a few builds of IE4, IE5, Windows 98 and Windows 2000. I'm not sure whether this was the inspiration for the Windows 7 team, but it's still interesting to see how they came back to this idea a decade later.

If you're old enough to have used Internet Explorer 4 when it came out in late 1997, you probably know it also included something called "Windows Desktop Update". This basically integrated IE and Windows Explorer so the latter could display web content, including on the desktop (called "Active Desktop"), but it also included channels (push technology similar to RSS), folder customization and a few other minor things some Windows 95 users were not particularly fond of. All this was present by default in Windows 98 (and Windows 95 OSR2.5, released the year before), which shipped with IE4, but it was also made available to Windows 95 and NT 4.0 users. Windows 2000 started development around the same time as Windows 98 and was initially also planned to include IE4, but since the development dragged on and on, it ended up shipping with IE5 instead.

One of the early ideas on how to improve the shell was to add a dedicated "show desktop" button on the right side of the taskbar (right of the system time and tray icons, to be specific). This is the exact same spot Microsoft later put the same button in Windows 7. Windows 95 already had a "minimize all windows" option, but it was hidden away in the taskbar context menu, so a dedicated button for this was definitely a handy thing for some users. A related feature, which I'll get back to later on, was the Quick Launch bar on the left side of the taskbar, right next to the Start button. It allowed you to put shortcuts onto the taskbar for launching applications even when you can't see the desktop.

Development of IE4 started out in early 1996 or so, before even IE3 was completed - early IE4 builds still say "Internet Explorer 3 Beta 1" in the About dialog. Looking at the leaked builds of IE4, it appears the show desktop button was added quite late into development in late 1996, just before the public "Platform Preview" phase. The specific build would be between builds 4.70.1169 and 4.71.0225.1. Don't get confused by the odd version numbers, it's how IE versions before 5.0 were versioned (in typical Microsoft fashion). The button persisted into Platform Preview 1 (builds 4.71.0517.5 and 4.71.0544.0), but was removed by the time the second Platform Preview build 4.71.1008.3 was made. I installed build 4.71.0225.1 on Windows 95 RTM for your viewing pleasure. 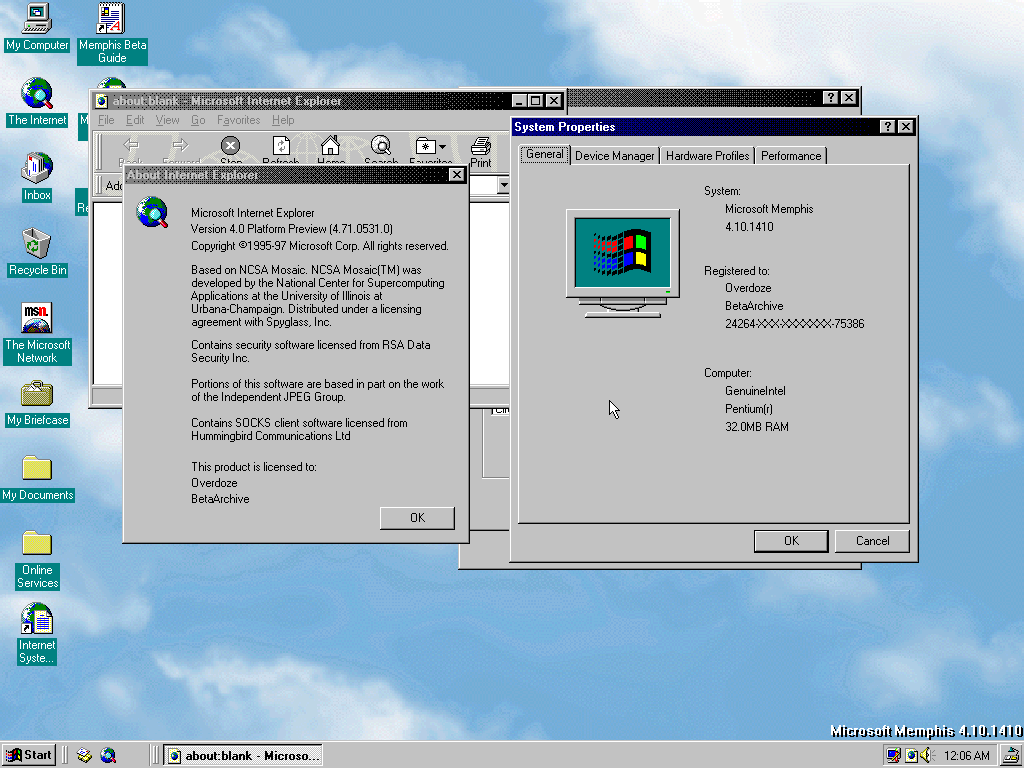 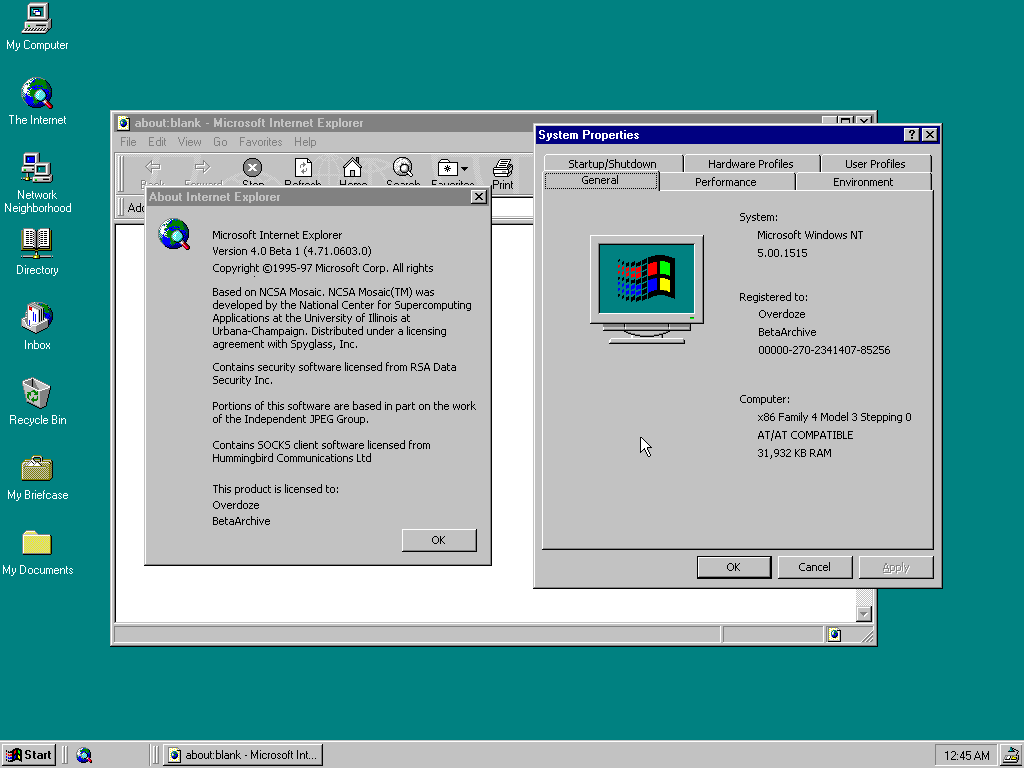 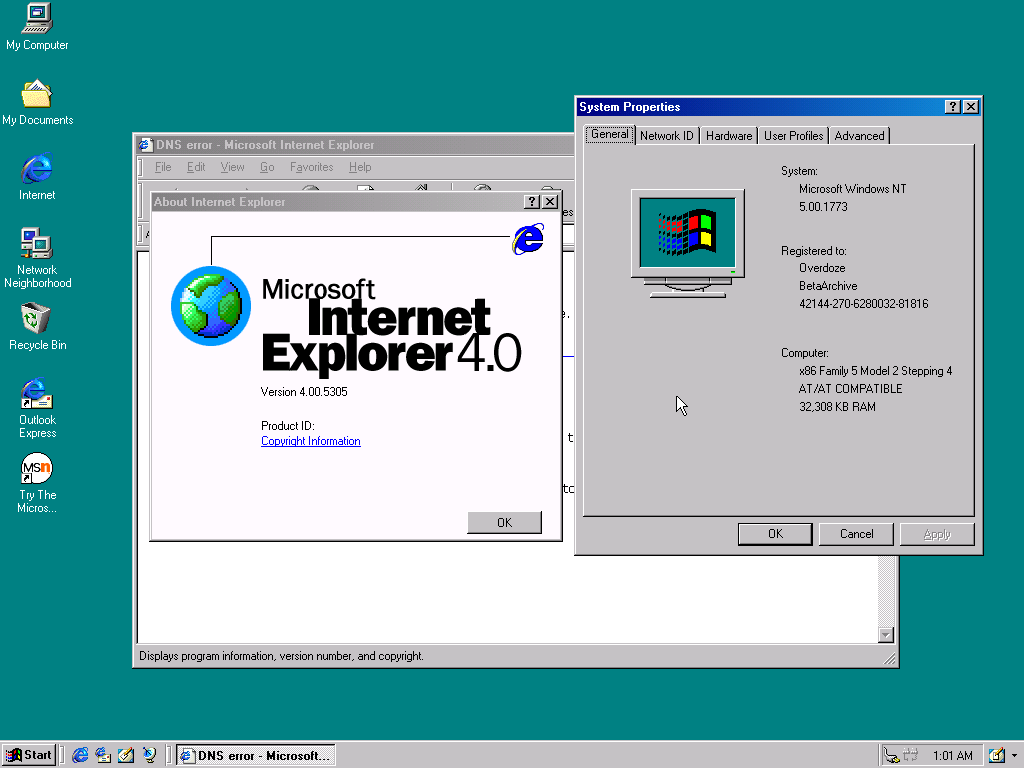 But while the button itself was gone, the "show desktop" feature survived in the form of a default shortcut on the Quick Launch bar I mentioned at the start of this post. It remained there even in Windows Vista. Windows 7 then introduced the superbar which got rid of Quick Launch but brought back the dedicated "show desktop" button. I'm not exactly sure why Microsoft implemented and then removed this feature twice (I personally think it would've been a nice thing to have), but I can guess that making a simple shortcut on the Quick Launch bar is just easier and simpler than having a dedicated button for it.

« Windows briefly had a "Ship It!" button - A new Windows 1.0 pre-release build was found »