Windows 1.0 was demonstrated at fall COMDEX 1983 on 29th November. Microsoft also prepared some promotional material for this occasion, which includes three photos of the OS.

The first photo can be found on the cover of a brochure on The Story of Windows: Part 1 page. The accompanying text suggests this was included in the famous launch kit that was sent out to the press shortly before the November 10th announcement in New York. The other two photos seem to come from inside the brochure, a page of which was posted on Microsoft's facebook page. No other pages from the brochure seem to be available online.

Art and MS-DOS windows are opened on the left, while Text is on the right. There is another instance of Art minimized at the bottom, along with the Calendar. There's not much to point out here, aside from the help button once again sitting higher than the minimize button and a unique menu in the MS-DOS window. It's much like the earlier menu seen in the last photo in InfoWorld's November 21st issue (see part 3), except it has an additional "run" command (which can also be seen in the later variant of the menu, when some command names were changed). The text in the menu bar is also sitting higher, so that it's not touching the bottom border, something which is evident in the announcement build but not in the build shown in the French magazines (see part 4 update). The "dos>" prompt is not in bold.

And yes, there is a reflection of a man in the screen, in case you haven't noticed. He's obviously impressed with what he's looking at.

The other two photos 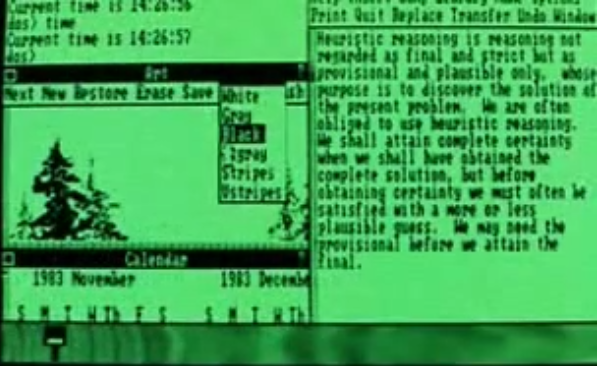 In the second photo, MS-DOS window is now in the top left part of the screen, Art is in the middle left and Calendar at the bottom left, Text is still on the right and one instance of Art is minimized. A menu is open in the Art window and it's touching the titlebar (it doesn't in the French photos). The Calendar window appears to have a vertical scrollbar, another feature seen in that lone photo from InfoWorld, but not in others.

In the third photo, the Text window was enlarged towards the left and the mouse pointer is hovering over its titlebar, revealing the additional window control buttons. Unlike in the InfoWorld photo, the buttons are on the far left, right next to the minimize button, as opposed to the center. In one photo, which I'll discuss in a future post, they even appear half way to the left. Perhaps their position was not always fixed, though it definitely is in the COMDEX demo build - no matter where you hover over the titlebar, the buttons are always on the far left.

Overall this build appears to be in between the one from InfoWorld that I mentioned and the announcement build. In part 6 I'll look at what Wang has demonstrated at COMDEX.