There were actually two minor demonstrations of early Windows builds between the official product announcement on 10th November and Fall Comdex 1983 on 29th November. The first one was held on 14th November at Microsoft's offices in Bellevue, Washington for InfoWorld staff, with a major article published in their 21st November 1983 issue. The second one was on 22nd November, with an article published in February 1984 issue of Golden magazine. Today we'll be looking at the InfoWorld demo build.

InfoWorld published three photos, two of which are of the same build and were definitely taken at the event, while the third one is from an earlier build (I'll explain why once I get to the third photo). I'm not sure where or when it was taken (perhaps even at the same demo?), but it does give us a nice reference point and some material for analysis. 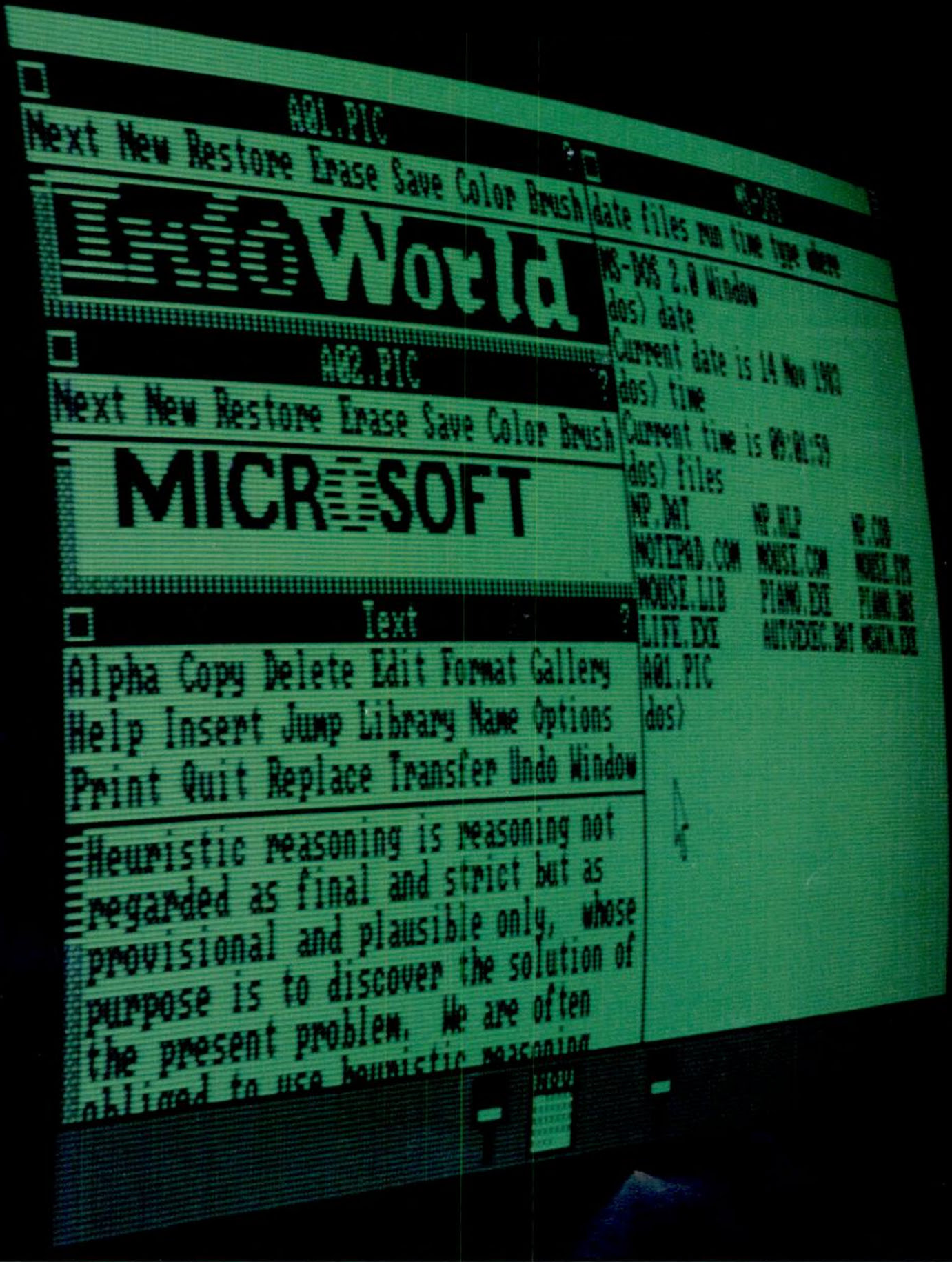 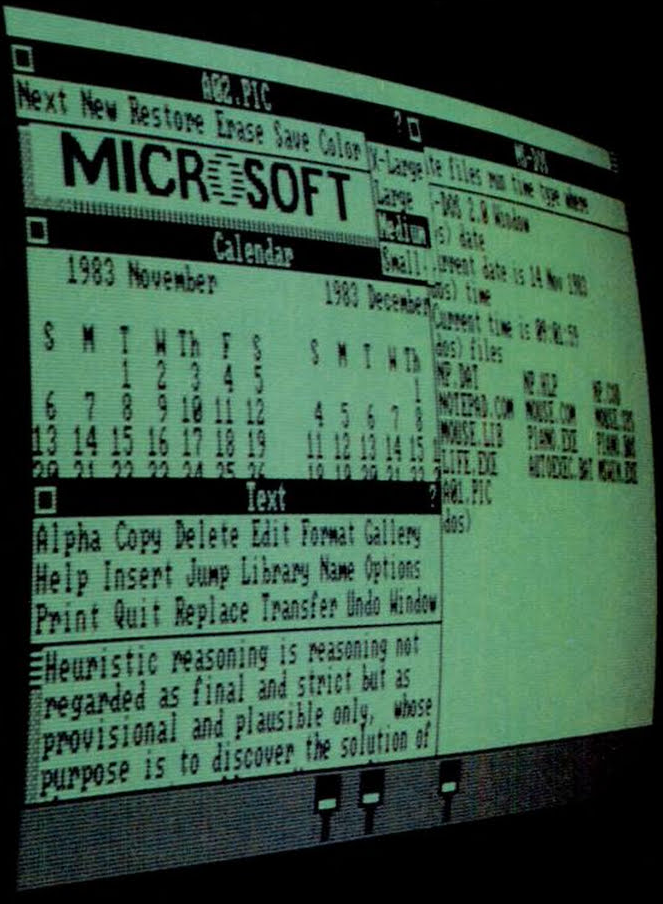 The first photo is featured right on the cover of the issue. The screen is split between four applications: on the right we have the MS-DOS window, and on the left two Art and one Text windows are vertically tiled. This is also the first time we see applications running in the background, as there are three icons in the bottom icon area - the middle one is Calendar, the other two are additional instances of Art.

MS-DOS window is the most interesting thing, inside it we can see date, time and files commands were issued. System date is 14th November 1983 and the contents of what I assume is drive A: appear to be exactly the same as in previous photos from 10th November 1983. I guess Microsoft prepared this build for demos at various events and included Multiplan as well as Microsoft Mouse driver and demo applications, along with a couple of demo images.

Speaking of images, two Art (proto-Paint) windows are open on the left. Notice the top one is titled A01.PIC and depicts the InfoWorld logo, while the bottom one is titled A02.PIC and shows the Microsoft logo we've seen in previous photos. However, in that case the window was titled Art. I'm not quite sure when and why the title changes, but one possibility is that it displays the filename when editing an existing image, or Art when editing a new (unsaved) image. In bottom left we have the Text window, which is showing us the same sample text we've seen before.

The only notable difference in the second photo is that A01.PIC window has been minimized to the icon area and Calendar was brough up instead. We can also see a menu being opened for the first time (notice the arrow-up cursor). Based on the overall simmilarity with the 10th November build and the same files, I say this is likely the same or at least a very close build. 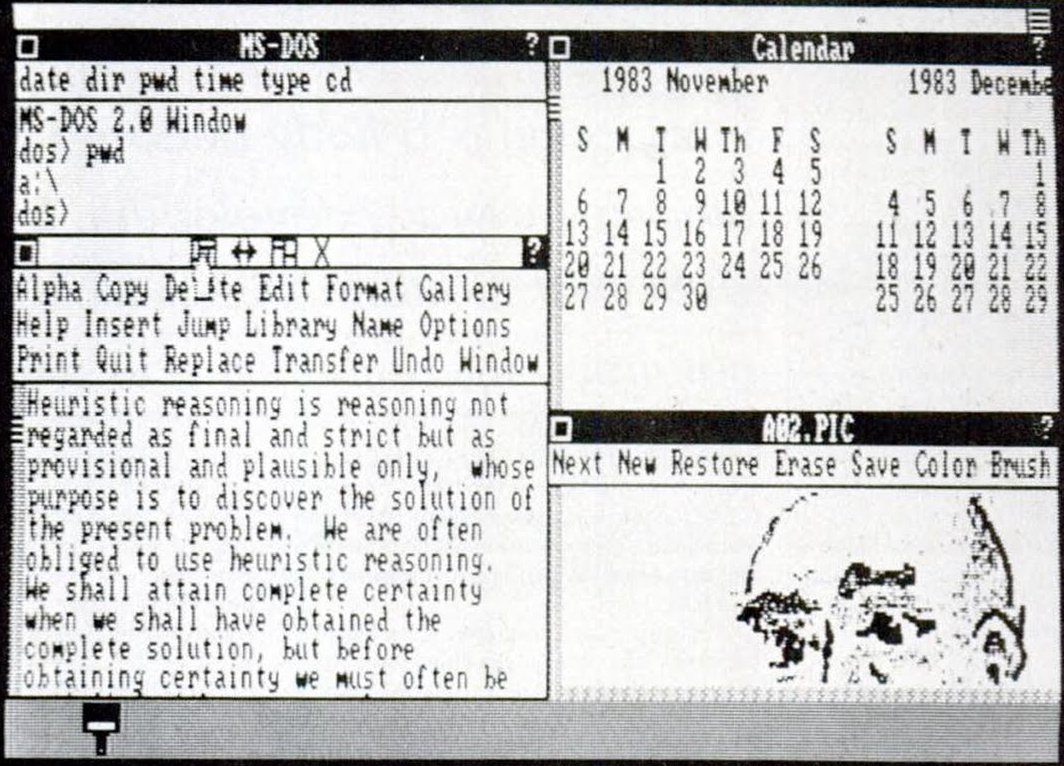 This photo also shows us four apps running - MS-DOS window, Calendar, Text and Art (A02.PIC), while an additional instance of Art is minimized in the icon area. A02.PIC is a man's head in this case, which is interesting, to say the least. The menu in MS-DOS window is different from what we've seen so far. Here it has options "date", "dir", "pwd", "time", "type" and "cd" (which are all true MS-DOS commands), instead of "date", "files", "run", "time", "type" and "where". A build with system date set to 9th April 1984 (which I'll analyze once we get past all these Comdex-related builds) has the latter menu, as well as other UI changes that confirm it's newer than both builds discussed in this post.

The Calendar window has a vertical scrollbar, while later builds don't. This all seems to indicate the build in this photo is in fact older than the announcement or Comdex builds, but of course still newer than Interface Manager. A major UI element we get to see for the first time are window control buttons in the middle of the titlebar, which are only revealed once the user hovers the mouse cursor over the titlebar. Notice I said in the middle, as you'll soon see they're on the left side in most later photos. More evidence that suggests this is an earlier build. I'll discuss the function of these buttons in the Comdex post, where their use was demonstrated and captured on video.

I think it's safe to say that the first two photos depict a build very similar to the announcement build I've already discussed in part 2, if not even the exact same build. The third photo is a bit of a mystery, however. It clearly features an older build, so was it taken at the same demo, and if so, why was the press shown two different builds? If not, then there must've been some other event where the photo was taken.

As said in the intro, it seems there was another demo held before Comdex, on 22nd November. I'll be looking at what the French magazine Golden published in their February 1984 interview with the CEO of Microsoft France in part 3.