As promised in part 1, here are some additional thoughts regarding the build that was shown in BYTE's December 1983 issue, as well as some other related bits.

Below is some extra information regarding early development of Windows 1.0 that I left out in part 1 due to length concerns. Also some additional thoughts about the "Interface Manager" build. I was a bit short on time lately, so that's why this comes over a month after the original post. But better late than never, right?

I'll start with the issues of when Windows 1.0 development actually started (including when the idea of a GUI on top of DOS was born at Microsoft) and when the name was changed from Interface Manager to Microsoft Windows. Hard Drive: Bill Gates and the Making of the Microsoft Empire says it began in late 1981, after Bill Gates saw the first Macintosh prototypes a few months earlier, and The Making of Microsoft: How Bill Gates and His Team Created the World's Most Successful Software Company further pinpoints the date as September 1981. Hard Drive then says Bill Gates made a press statement in January 1983 about beating VisiCorp's VisiOn to the market after noticing their announcement at the 1982 Fall Comdex. The Verge, in their article on 27th anniversary of Windows 1.0, claims Gates saw VisiCorp's demo of VisiOn at the 1982 Comdex and was only then inspired to develop a graphical user interface of their own.

According to Ed Scannel in InfoWorld 1991-10-21, it was also in early 1983 that Microsoft first pitched an early version of Windows to IBM, but failed to secure endorsement due to IBM's own TopView project. PC Computing's March 1993 issue and "Gates" (the latter by Stephen Manes and Paul Andrews) claim Microsoft made a "smoke-and-mirrors" demo of Interface Manager in April 1983. Around mid-1983 Rowland Hanson, Microsoft's vice-president of corporate communications, convinced Bill Gates to change the name of the project to Microsoft Windows, so that the users would immediately associate the concept of a graphical user interface with Microsoft's product. Microsoft made a second attempt at convincing IBM to support Windows on 11th November 1983, the day after the official announcement was made in New York, with no sympathy from IBM once again. The final attempt at getting IBM on their side was made in October 1984 with the same disappointing result.

Most of the information above is sourced from this nice website by Ken Polsson. I was unable to find some of the sources he lists online, so I rely on his claims in good faith.

I forgot to mention a somewhat important detail in the previous post regarding the date of the demo: since BASIC86 shows the date of 24th May 1983, it's obvious that the demo could only take place after that (unless some time travel is involved). This contradicts the April 1983 date given above. Perhaps there were multiple demos in early to mid-1983, or the April date is simply a mistake. In any case, this doesn't help us determine the actual date when the build itself was made, but it is nonetheless an extra piece in the puzzle.

I've also found evidence that Phil Lemmons wasn't alone at the demo. Michael J. Miller of InfoWorld was also there, as stated in an article about Windows 1.0 finally shipping, published in 1985-12-23 issue of said magazine. He says he saw the early build over two years ago and that it was still called Interface Manager at the time, with the name change occurring sometime before the official announcement in November 1983. This is in contrast to Lemmons' use of the name Windows to refer to what he saw, but since his article was published so late, it's also possible he retroactively refered to the product as Windows after learning about the name change. Miller also correctly mentions two features that were discarded during the UI overhaul, namely overlapping windows and the Multiplan-like command bar at the bottom.

There's a rather interesting photo of Windows 1.0 on the cover of BYTE's issue that I didn't mention in the previous post. Due to the fact that it depicts 4 different screens right next to each other on a single monitor, each in a different color, it seems this was a heavily edited image based on actual photos of the OS. If you look at what's shown on the screens and compare it to other, unedited photos from the magazine, you'll see what I'm talking about. 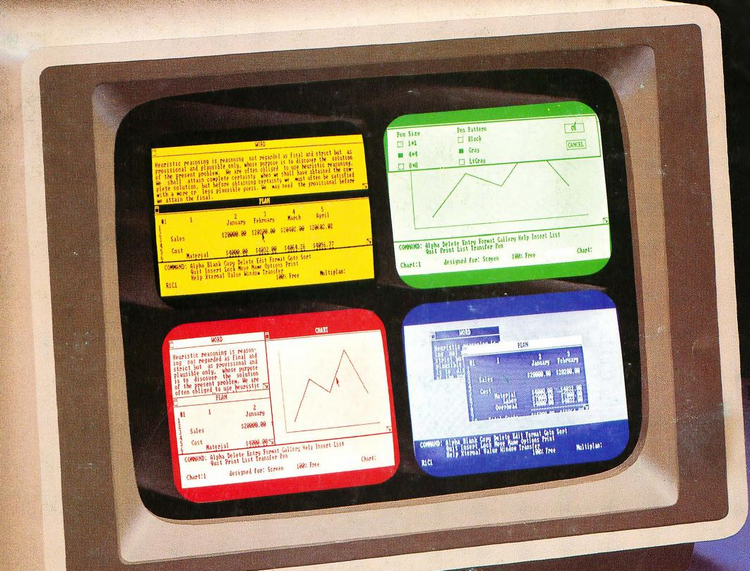 And last but not least, Phil Lemmons wrote another article about this build 21 years later, where he wonders whether or not what he saw was actually a fully functional build or just a carefully crafted press demo creating the illusion of things working, even when they actually don't. He sums it up rather nicely, so I suggest you read the article (again courtesy of GUIdebook, scroll down to read it if you haven't already).

I hope this sheds some extra light on this topic. From now on I'll try to post chronologically, so in the next part (which will come eventually...) I'll discuss the build that was demonstrated at the official announcement event for Windows on 10th November 1983.