In this first part of the series on the development of Windows 1.0 I'll be discussing the photos of the earliest known Windows 1.0 build, published in December 1983 issue of BYTE magazine. This build was demonstrated to Phil Lemmons, as well as some other people, and is often called "Interface Manager", the name of the project before it was renamed to Windows.

Update (14-11-2017): I've made some adjustments to the image layout to save screen space, now displaying two per line instead of just one, as well as some improvements to the text.

I recommend you read the article first, available in digital form at GUIdebook.

Phil Lemmons wrote a nice overview of what he saw and included several photos of this peculiar build. However, pay attention to the issue in which the article was published - December 1983. This was already after Windows 1.0 was already officially announced on 10th November and shown to the world at COMDEX on 29th November. Obviously getting an article published back then wasn't as fast as it is these days, which explains the delay. But still, I can't help but wonder why was Microsoft showing a discarded UI prototype of a yet-to-be-announced product to the press? As the various photos of COMDEX-related builds show, the UI Lemmons had seen was pretty much obsolete in November, if not earlier. For all we know, the build in question could even be from early 1983. Even Lemmons himself notes mid-way through that Microsoft has since completely overhauled the UI.

Now let's look at the photos in more detail. The first photo shows us the default state of the system after booting, essentially an empty desktop. Notice the black mouse cursor and a command bar at the bottom (Lemmons calls it "session-control layer"). The latter is functionally pretty much identical to the more fammiliar concept of a menu bar at the top, and it was also used by some of Microsoft's DOS applications - most notably Word for DOS. It's not the greatest choice of UI design though, hence why it was likely scrapped in favour of every application having a separate menu bar at the top of its window. According to Lemmons, the command bar works with both mouse and keyboard, and programs are started via the Run command, which brings up a list of available applications to choose from. Lemmons also notes that upon starting, Windows can continue where you left off previously (in other words, it restores your last session), a rather fancy feature that persisted for some time through 1984, but was ultimately absent from the final product (along with several others I'll discuss below).

Lemmons further states that applications which do all their input and output through the MS-DOS API are "cooperative" and can be displayed in a window when running under Windows. Applications which access the hardware directly (most often for performance reasons) are called "uncooperative", as they can obviously override Windows completely, so they are given the entire screen. One cooperative applications is Microsoft's BASIC, seen in photo 2. A couple of note-worthy details about this next photo: BASIC86 is the MS-DOS release of version 5.28, dated 24th May 1983. Unfortunately, this isn't reliable information for determining the date of the Windows build itself, as BASIC86 could either predate the Windows build in question or be the latest version available at the time and was used with an old build of Windows. Next thing is the icon in the top left corner of the window, but its exact function is sadly not described. Perhaps it's used to rearrange windows around or closing them like in later builds. The resize box in the bottom right will be discussed later at photo 5. Also notice that the commad bar at the bottom did not adapt to BASIC86, as it does for some of the applications we'll see later.

Photo 3 only shows the cursor hovering over the Run command. Microsoft Piano, seen in photo 4, is an example of an uncooperative application. It takes up the entire screen, even disposing of Windows' command bar at the bottom. Piano shipped with Microsoft Mouse as a demo application in June of that year.

Photo 5 shows a familiar program: Microsoft Word. Although you may quickly assume this is the common DOS version of Word, you'd be wrong. The command bar has now adapted to Word, but it's not showing the same commands as version 1.15 under DOS. The name of the application in the bottom right is also different, plain "Word" in this demo but "Microsoft Word" in the regular DOS version. It's likely that this is a special version of Word, designed to work with Windows, though this can't be confirmed due to limited information available. But it's certainly not the regular DOS version, at least as far as I can tell. 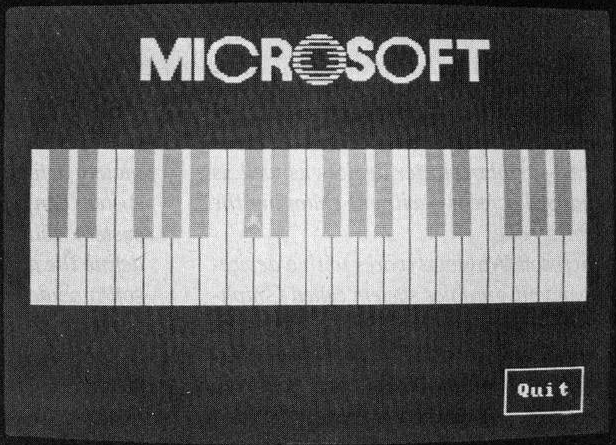 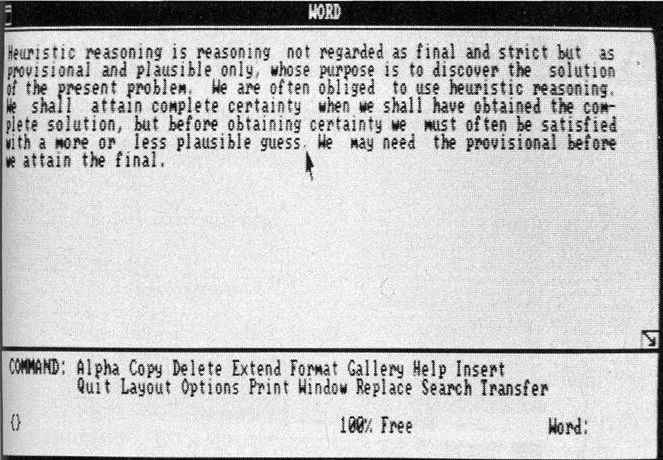 Next we see Word and Multiplan sharing the screen as they are horizontally tiled. Lemmons says that the arrow icon in the bottom right can be used to resize windows. They can also be moved by dragging their title bar around. The command bar of course displays commands for the active window, that is, the one with focus. And just like Word, Multiplan also features a slightly different command set than its DOS counterpart. Now here's the really interesting bit: apparently the positions of the title bar and the resize box are completely up to the developer of the application. I am not entirely sure how this would work (just imagine all the inconsistencies!), but apparently the UI was much more flexible back then. Of course it's also possible that this was just marketting promise by Microsoft for a feature that was eventually abandoned due to its complexity and big consequences it would have. Lemmons then informs the reader that Microsoft has since made significant changes to the UI - every window now features a question mark (help) button in the top right, hovering the cursor over the title bar reveals additional window options, a status bar was added to the top and an area reserved for icons of minimized applications to the bottom. Sounds familiar?

Photo 7 is not that interesting, as it only shows Multiplan has been enlarged and Word has been shrunk. One thing worth noting is the apparent absence of scroll bars. 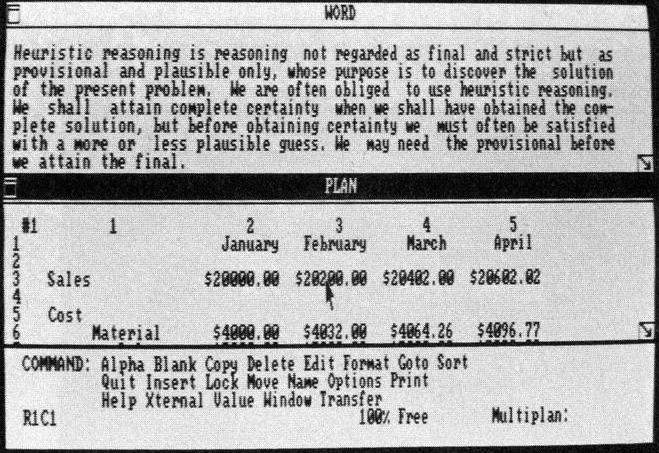 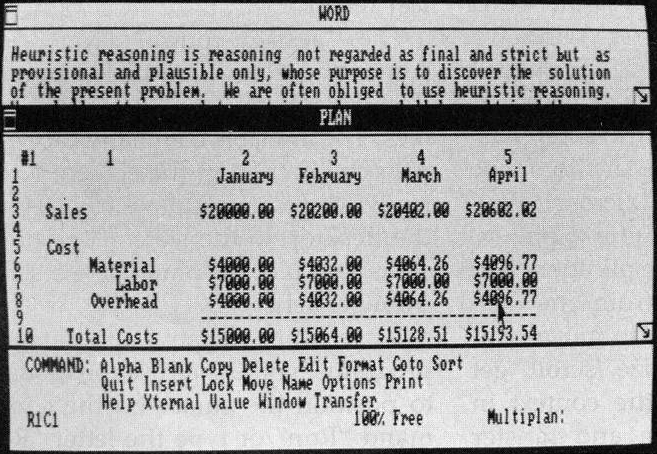 However, photo 8 reveals more interesting information: in this build, windows can be freely resized and even overlap, as we see Word and MultiPlan each being reduced to only a quarter of the available screen space, leaving the rest unoccupied. This is yet another feature that was removed with the UI overhaul. Perhaps this was done to avoid simmilarities with the upcoming Macintosh and a potential lawsuit by Apple (which happened later anyway, when Microsoft re-added this feature in Windows 2.0), though the official reason as stated by Microsoft was along the lines of making the best possible use of the entire screen at all times.

A third program is opened: Microsoft Chart which can turn Multiplan data into simple charts. Just like Word, the command bar simply calls it Chart instead, and the list of commands is again different than the one in the DOS version. 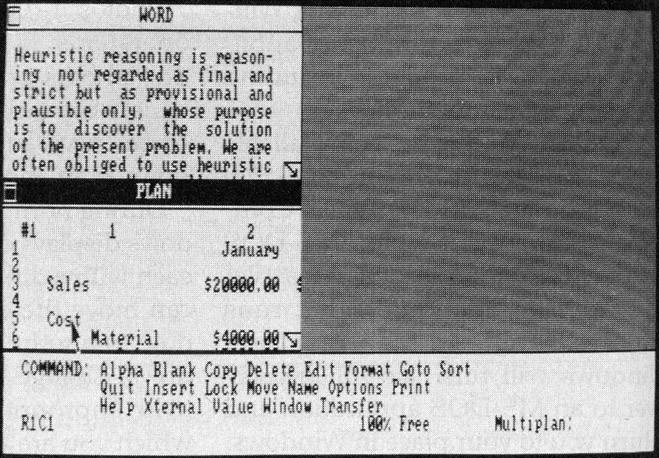 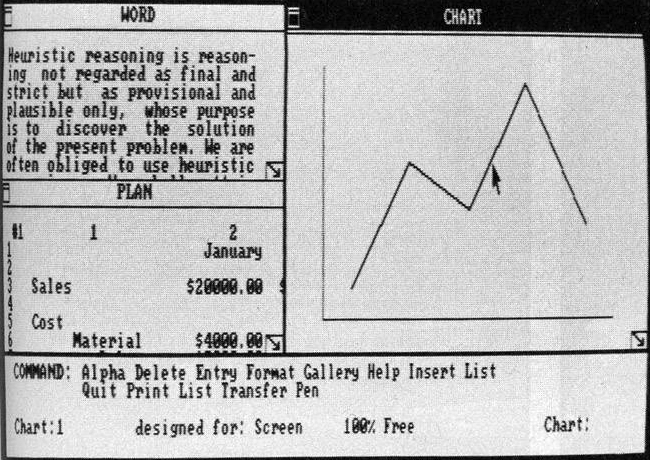 Another important feature is that Windows can rescale graphics inside an application if its window is resized, as seen in photo 10. Photo 11 reveals the existence of simple pop-up dialogs. Using the Pen command at the bottom brings up this pop-up dialog, where the user selects the pen size and pattern, then confirm his choice by clicking on the OK button. We also see the first incarnation of radio buttons. 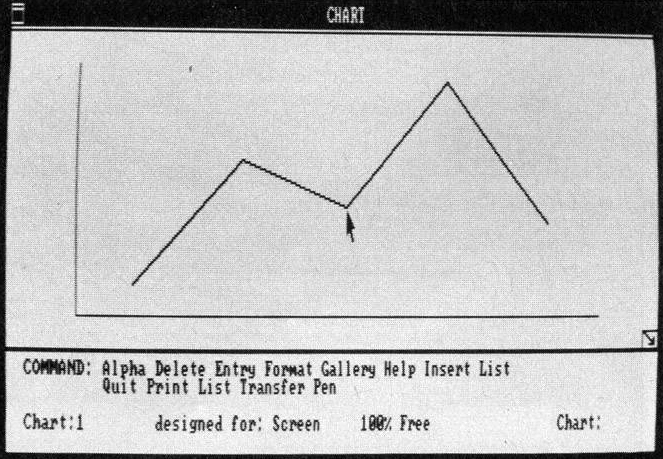 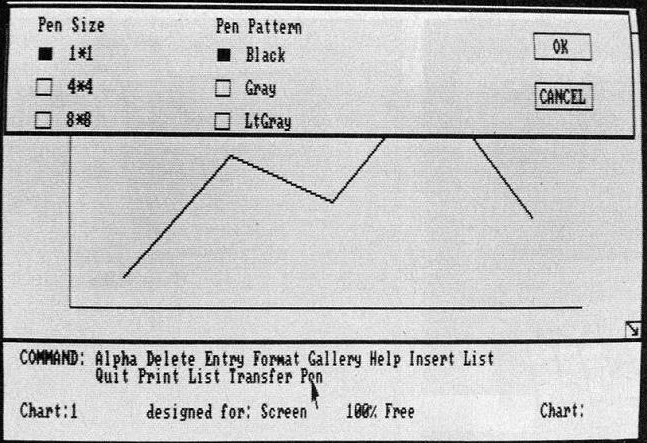 Photo 12 only reveals the cursor apparently changes when hovering over the OK button. It looks to me like it's meant to represent a check sign, albeit a rather weird one. Lemmons again mentions that the design of these pop-ups is also up to the developer (again, more inconsistencies is all I can think of).

The last photo from the demo shows the changes made to the chart after applying the selected pen options. Windows' graphics capabilities are powered by a device-independent graphics system, according to Lemmons. The rest of the photos depict Windows running on a variety of machines, some more, others less PC-compatible. Whether or not Windows was actually ported to so many different machines so early in development is unknown, but it could also be a marketing promise of Windows' portability that was in fact at least partially delivered. 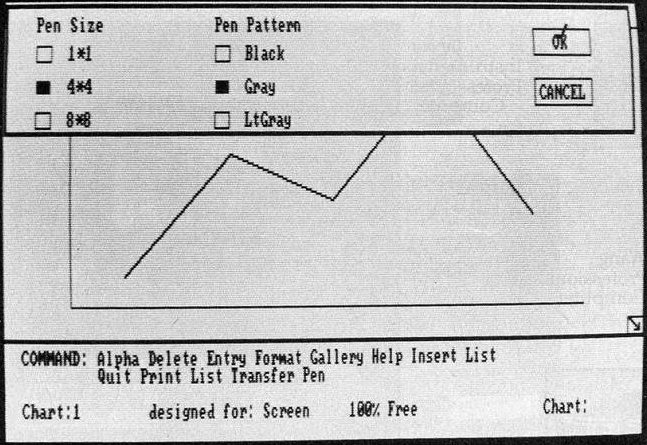 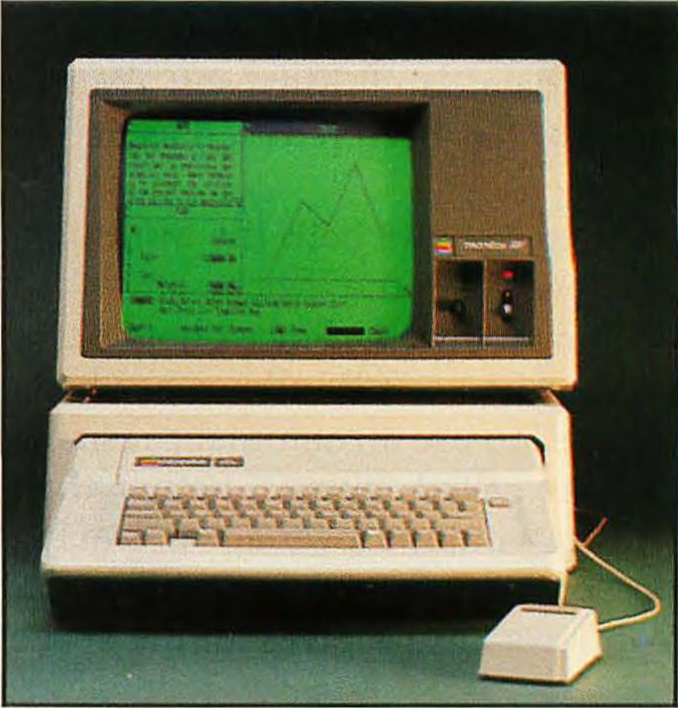 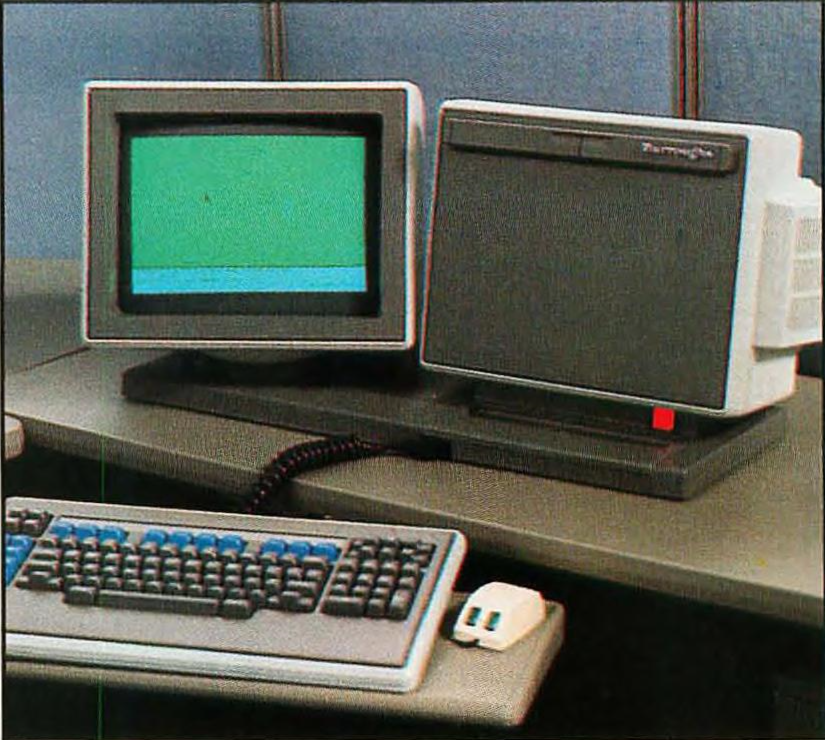 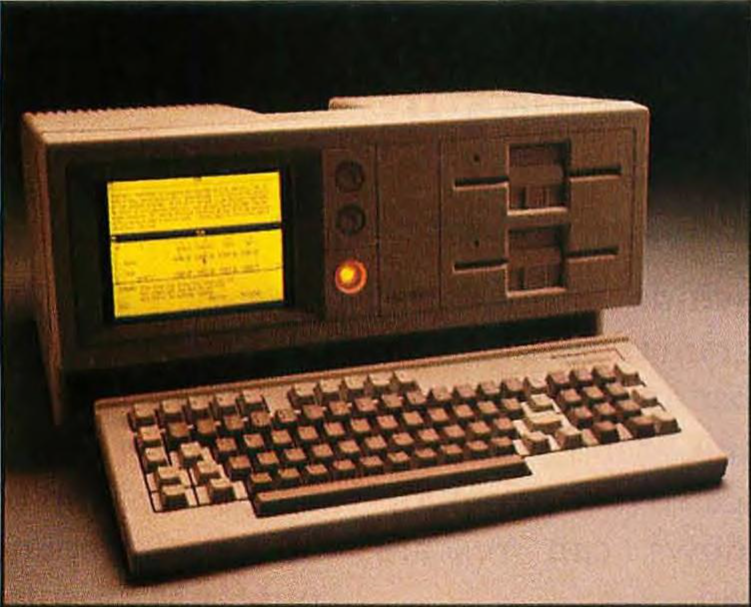 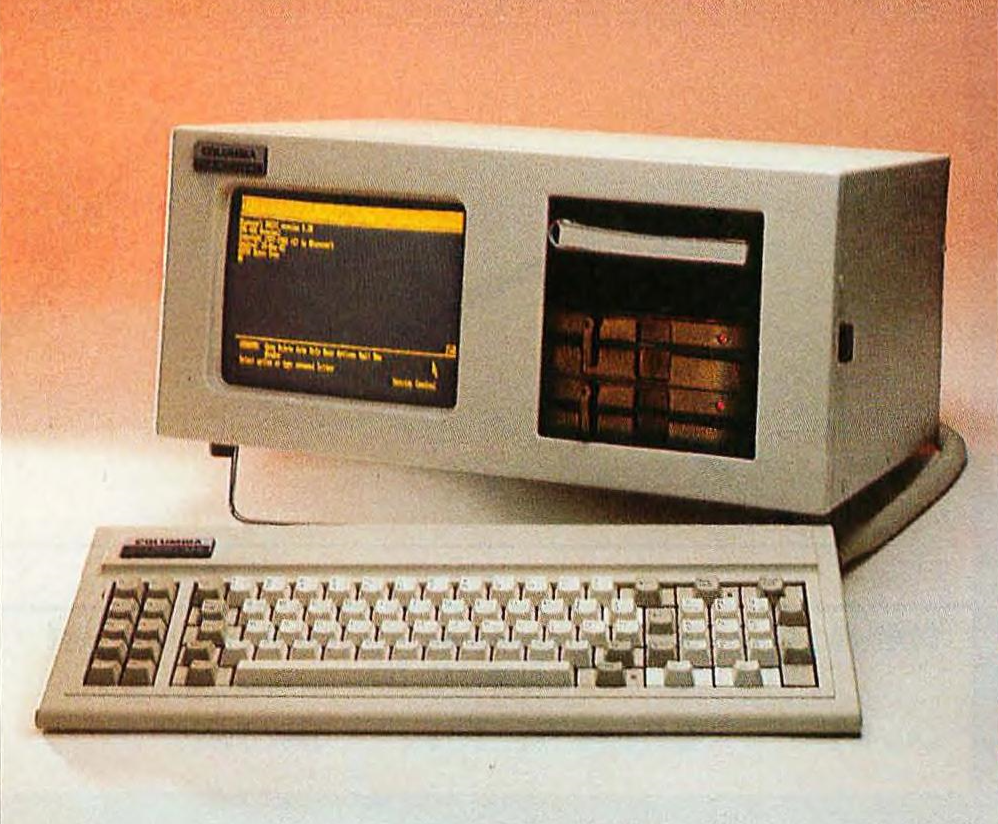 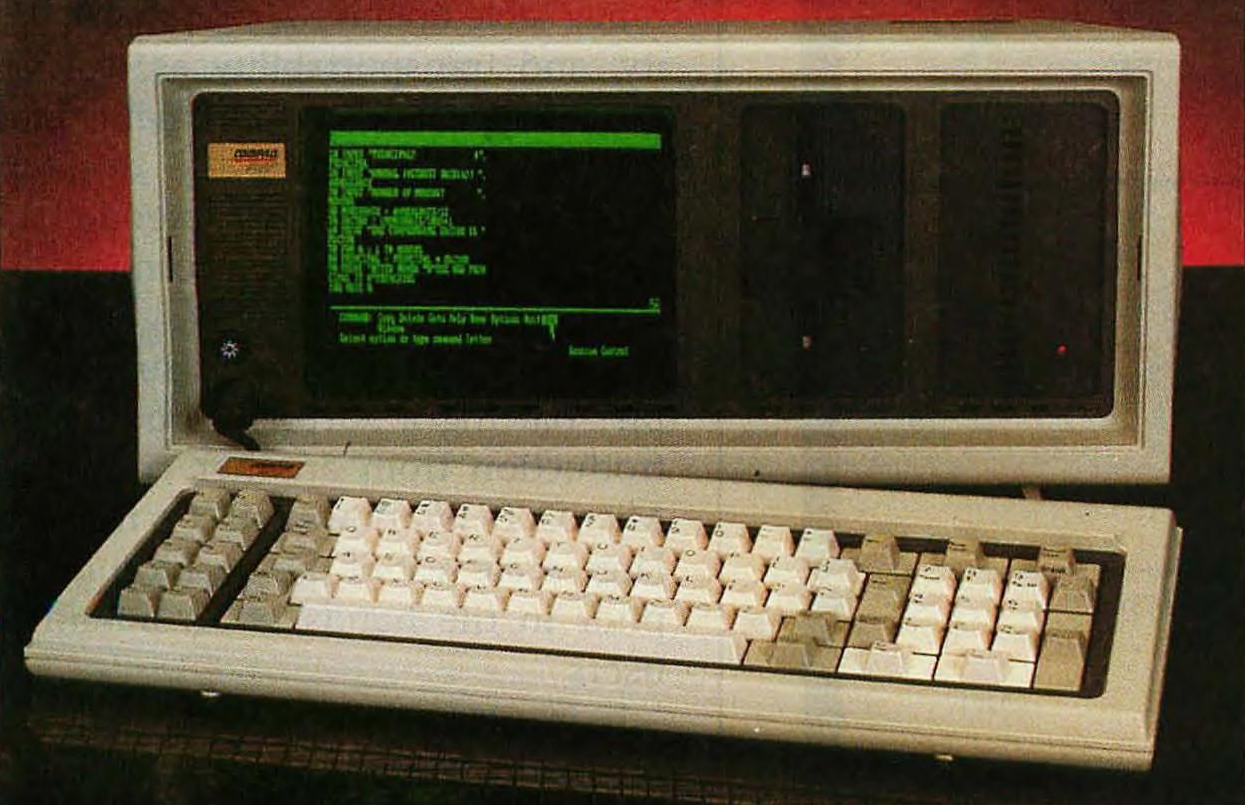 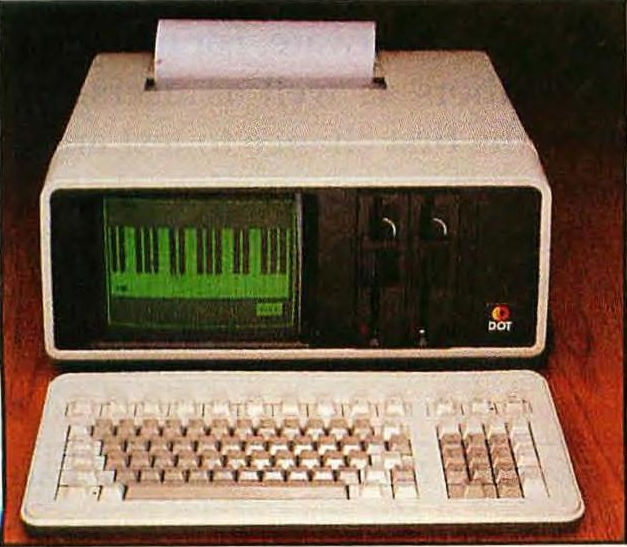 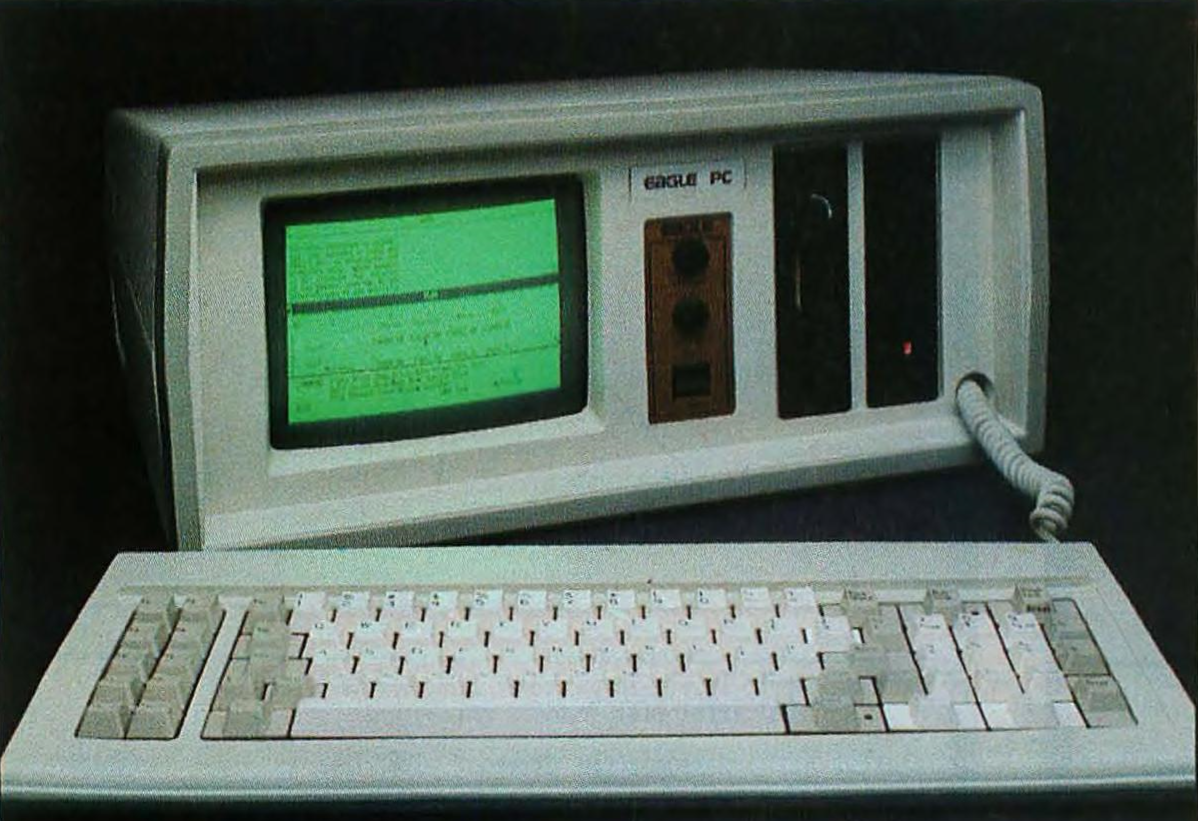 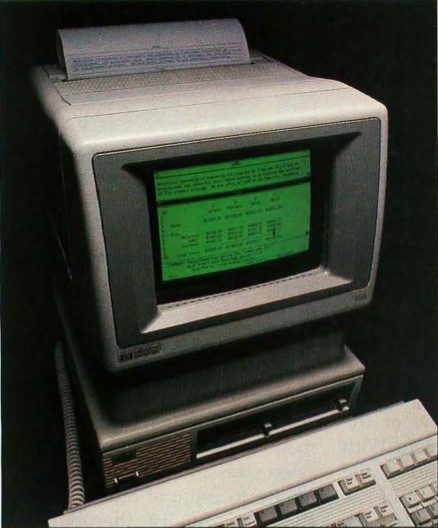 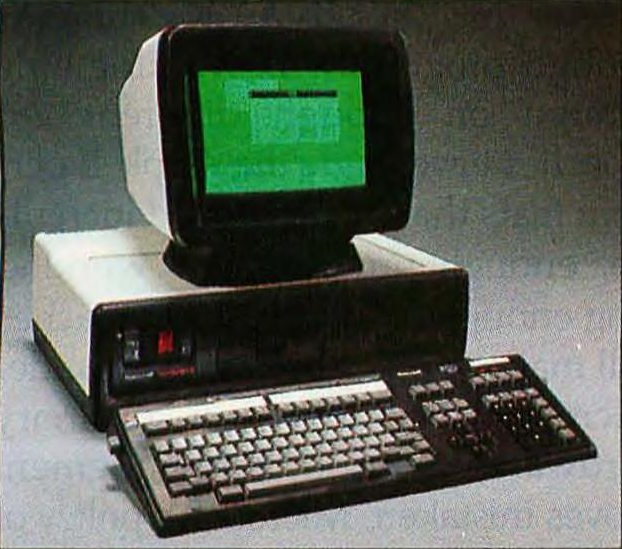 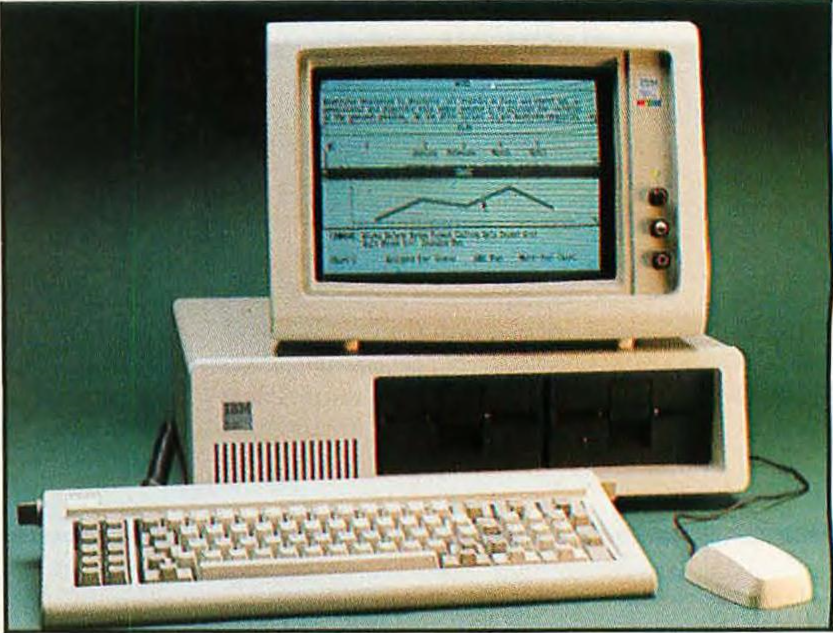 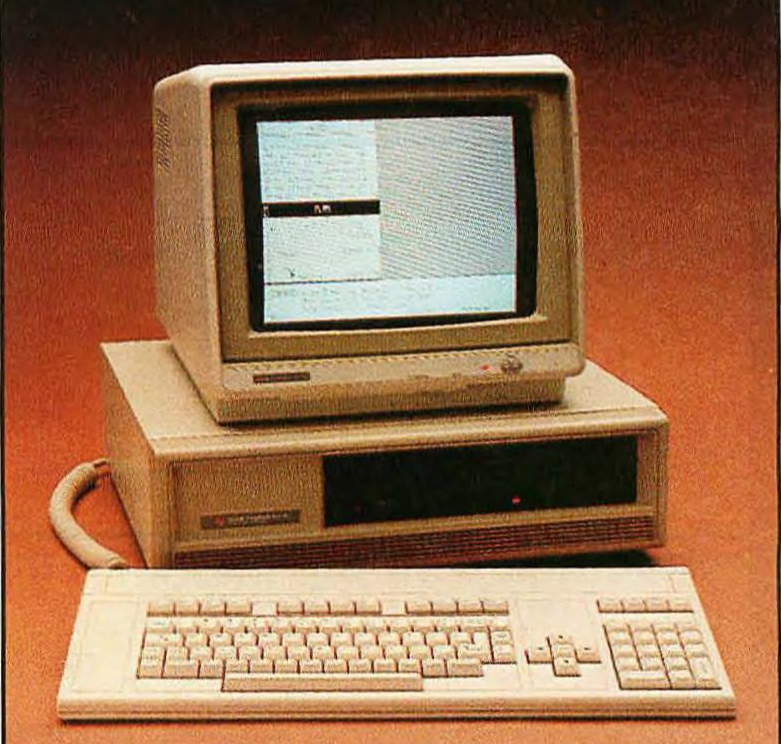 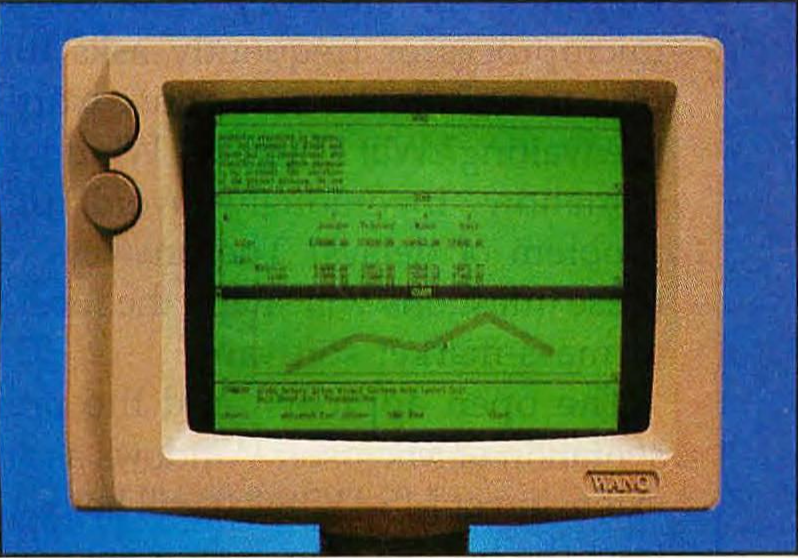 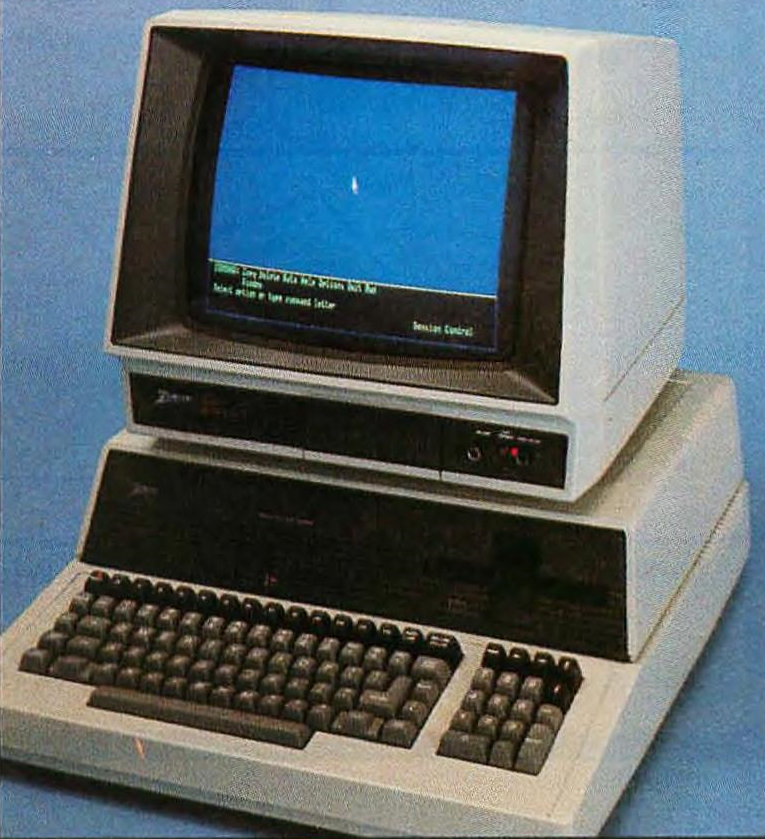 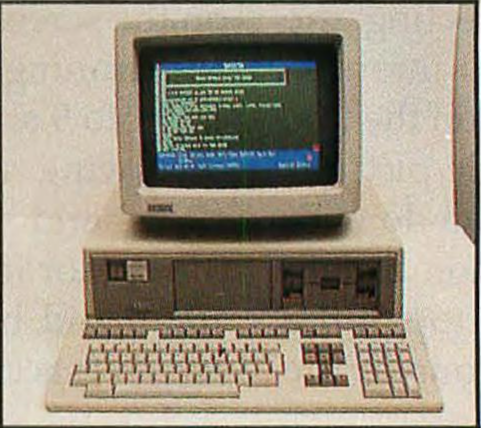 This concludes my first entry into the development and evolution of Windows 1.0. Due to length concerns, I decided to skip the initial "when did Windows development actually start" part, the name change from Interface Manager to Windows, as well as discussing the possibility that this build wasn't actually as functional as Microsoft made it seem. I've since made a separate post for that.

Part 2 will discuss Windows as it was shown at the official announcement of Windows on 10th November 1983 in New York.